Tim Sass is the W.J. Usery Chair of the American Workplace and coordinates the Usery Workplace Research Group. 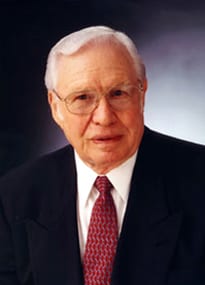 W.J. “Bill” Usery, Jr., a native of Hardwick, Georgia, spent almost four decades in labor-management relations activity, having participated in hundreds of collective bargaining disputes in a wide variety of private industries as well as in the public sector. He is widely recognized as the nation’s top mediator.

Mr. Usery held five Presidential appointments, three of which required Senate confirmation: Assistant Secretary of Labor under President Richard Nixon, special assistant to the president for labor management negotiations in two administrations, and Secretary of Labor under President Gerald Ford.  For three years, he was national director of the Federal Mediation and Conciliation Service, serving as the government’s chief mediator in every labor-management dispute of national significance.

Under Presidents Kennedy and Johnson, Mr. Usery was the industrial union representative on the President’s Missile Sites Labor Committee at the Kennedy Space Center in Florida and the Marshall Space Flight Center in Alabama. From 1993 to 1995, he served on the commission of the Future of Worker-Management Relations and was appointed by President Bill Clinton as special mediator for the major league baseball dispute.

In 1985, Mr. Usery established the Bill Usery Labor Management Relations Foundation for the betterment of public awareness and understanding of labor-management relations, collective bargaining, and other human resource issues in the free enterprise system. In 1991, the Foundation helped create Partners in Economic Reform, which is working with democratic labor and management to promote economic development and free collective bargaining in the New Independent States of the former Soviet Union.

Bill Usery attended Georgia Military College and Mercer University and served in the Pacific Fleet of the U.S. Navy from 1943–46. He has donated his official papers to the Southern Labor Archives at Georgia State University. Bill Usery passed away on December 10, 2016, at the age of 92.